The biggest question when planning a trip on the Transsiberian is probably: “How much money do I need?”

No worries, here are some guidelines to calculate your budget. Obviously, if you’re pockets are full and you wanna splurge, the prices can easily go up as your add comforts to your trip, but, assuming you’re sort of broke as we were, the prices below refer to as cheap as it gets.

So, all in all, a 1-month trip on the Transsiberian will cost you around: 1000 EUR, including train tickets, visa, accommodation, travel insurance and food and extras!

PS: To that you should supposedly add the price of a flight (or whatever means you’ll be using) ticket to get to St. Petersburg/Moscow and to fly back (if you’re going back!). On average, a flight from Europe to Moscow is around 150 EUR, a flight from Vladivostok to Europe around 400 EUR.

So what should you expect when boarding a Russian train?

Well, first of all, Russian trains usually have three classes:

1) First class (SV) = 2-berth compartments. It is the most comfortable type of carriage, it has a fold-down table between the beds, personal reading lights and a sliding, lockable door. There are 2 wash rooms and toilets one on each end of the corridor and are usually very clean. Sometimes you also get a TV and DVD player.

2) Second Class (Kupe) = 4-berth compartments with two upper and two lower berths. Luggage-storage is located below the lower berths, and in the large overhead bays. There are reading lights and a table + a sliding lockable door. 2 clean wash rooms and toilets are located at the ends of the corridor.

3) Third Class (Platskart) = it is an “open” carriage with 54 bunks (which means that there are no separate compartments), arranged in abs of 4 on one side and 2 parallel to the central aisle. Obviously there is much less privacy in this type of carriages, which can get quite noisy and are usually dirtier than kupe, but they are also way way cheaper. Also, if you’re a solo female traveller and are worried about safety, this is actually the safest option, since there are always people around and you won’t risk getting stuck with unwanted neighbors in a “kupe” compartment. Plus it’s the best way to meet people, so we definitely recommend this third option! 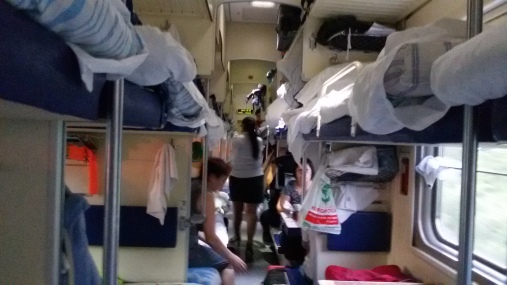 At each end of the carriages there is a toilet with a WC and a sink, which, unless you are travelling in first class, usually get dirty pretty quickly. There are no showers in 2nd and 3rd class wagons, while they are provided for 1st class passengers. Also, most trains don’t have retention toilets, so they discharge on the tracks, which is why the toilets get locked by the provodnik about 20 minutes before arriving at a station until after departure.

Each carriage, whatever class you’re travelling in, is looked after by two attendants called “provodnik” (male) or “provodnitsa” (female).  The provodnik will check your ticket when you board and, shortly after departure, he will come to your seat to give you the bedding (two sheets, pillowcase and towel) which is handed out in sealed packs, while blankets and mattresses will already be stacked in your compartment. Note that if you bought your ticket online and haven’t purchased the linens then, the provodnik will ask you to pay some 120 rubles. It is anyway specified on your ticket. The provodnik also does the daily cleaning on the carriage.

A samovar (which is a big water boiler basically) with unlimited free hot water is available at the end of the corridor , so bring some tea bags or instant coffee, soups or noodles and your own mug!

Most long distance trains have a restaurant car serving drinks, snacks, and full meals (price around 20 euros for a two course-meal and a couple of beers). It is usually located in the middle of the train. 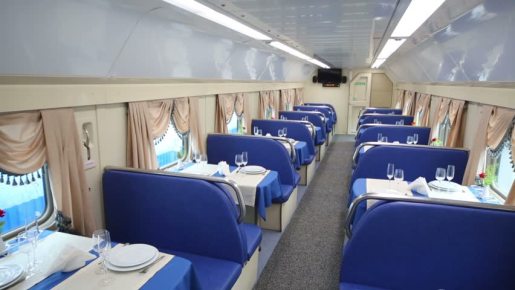 The restaurant-car staff also do a drinks/snacks trolley service down the whole train several times a day.

Still, the best thing is that at every stop there are old women selling home-made food outside of the train. You can buy soups, potatoes, meat, fish, pastries– whatever really. That’s what most of the people do anyway. Also, if you’re nice enough you’re Russian neighbours will usually offer you their salted cucumbers, rye bread, and vodka (so maybe make sure you have pack something to offer them in exchange).

Forget the wifi. There is no wifi on most Russian trains, so bring a book, play cards or talk to your neighbour to pass the time.

Every carriage has at least one or two sockets next to the toilets. First class and second class carriages have individual sockets in each compartment.

Russian trains are some of the safest in the world. Besides their other functions, the provodniks kind of act like the train police, so they watch everyone like KGB agents. Also, each train has its own police on board. There are no lockers, however if you take the lower bunk and put your valuables under your bed, no one will have access to it during the night (cause you’re sleeping on it). Things don’t usually get stolen, at least it never happened to us, but just maybe watch out for your stuff during the train stops when lots of people get on and off the train.

Smoking is allowed in “tambur” only (the passage areas between the carriages).

And now on to the most important question: How do I buy my train tickets? And, most importantly: what is the CHEAPEST way to do it?

There are many options to buy tickets, yet, like most things in life, the easiest ones do not happen to be the cheapest, on the contrary, if you are brave enough and determined enough to battle it up against the infamous Russian language and book as any Russian would do, you will end up sparing more than a few bucks!

There are indeed different agencies through which you can buy your ticket, all of which work in English, yet all of which apply commissions. They basically buy your ticket for you, and then they will either send it to you or they will set it up so you will be able to pick it up at the station. It depends. Here are two such websites:

Again, these are travel agencies, so it is really up to you and your budget, but, assuming you wanna go cheap, we suggest the following method, a.k.a. using the real Russian railways website: www.rzd.ru.

Warning: this rad website does not allow to buy tickets before 45 days from the day of the trip, so you can book as early as a month and a half before you plan on leaving. Also, the website is ALL in Russian, and the ONLY way to book tickets is to use the Russian version. I know, mission impossible? *** (UPDATE at the bottom of this page) ***

Maybe, but not if you follow our wonderful tutorial! Here is what you’ll have to do:

1: Gather all the patience you can find.

2: Follow the steps as shown in the screenshots below.

3: Should you have any problem, doubt or just need support: feel free to contact us! We will be happy to help you.

This window will open: 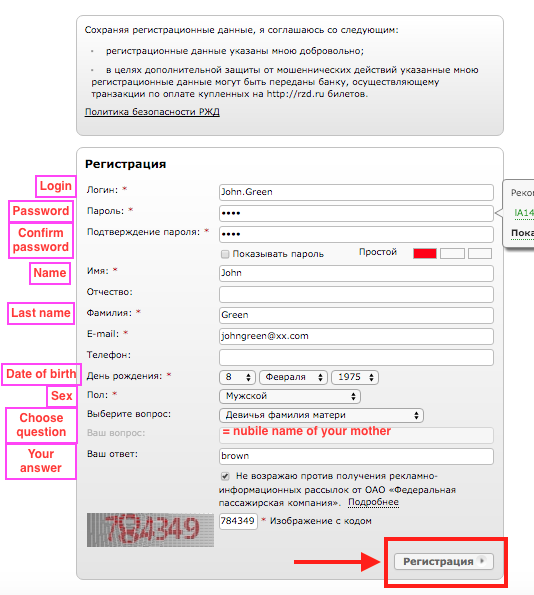 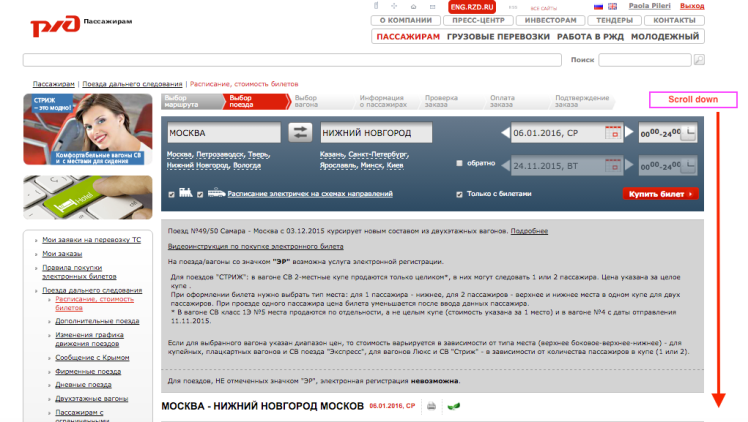 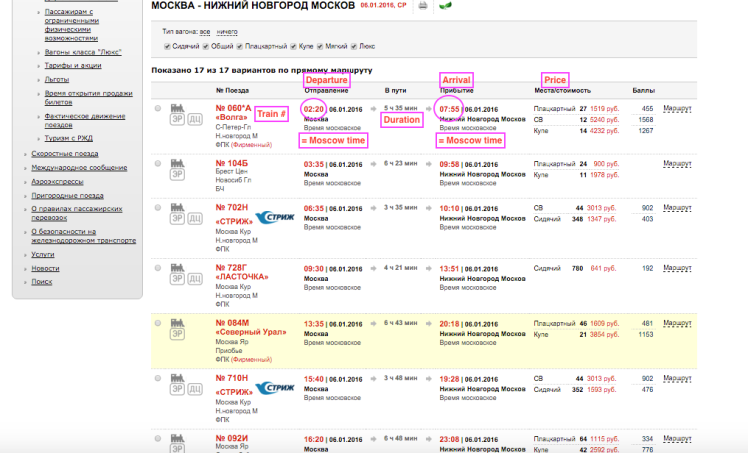 You now have to insert your personal information:

Continue to check the details of your reservation:

And… done! What now? Print your ticket and you are all set! A window should open with it, but if for some reason this does not happen or you cannot find it, you can always go to your profile settings, each reservation gets automatically saved in there. Here how to do:

Click on your name (top right), and then down on orders:

It will take you to this window: 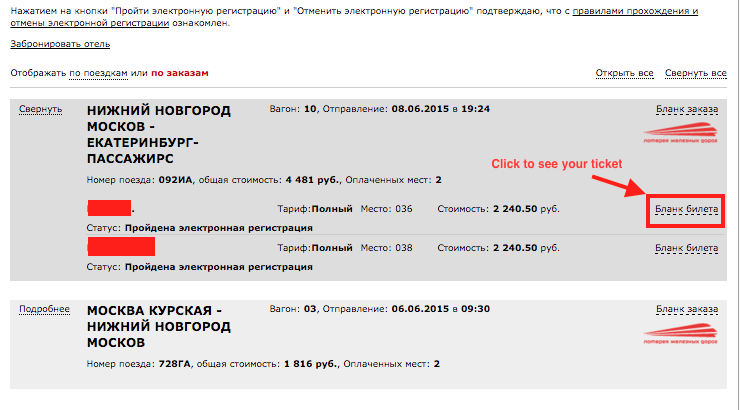 See? Wasn’t so hard after all, was it? Yes it was, we know, but at least you got to experience the real Russian way to book tickets and probably saved lots of money that you can now use on a stash of beer for the train (Shhhhh, that’s forbidden, we said nothing about it).

Good news! So apparently the Russians FINALLY updated their website and created a somewhat functioning English version for reserving tickets. You can find it at this link! It should work relatively smoothly, and well, in case it doesn’t, you have the tutorial for the Russian version right above!

The norms to enter Russia vary from country to country. Countries of the former Soviet Union generally have a visa-free agreement with Russia, or easier visa procedures, while on the opposite, citizens of the US will have to submit many documents to get a visa. The EU has a facilitation visa agreement with Russia, but still the visa procedure is long and rather expensive.
We recommend you to check the visa requirements for you country at the following website:
http://www.russianembassy.net/

In general, the requirements to enter Russia are the following:

If you are traveling to Russia as a foreigner, you will need a Russian visa. You can do it either from a consulate or from a travel agency. To get a visa, you will need:

To get your visa, you will need an invitation letter from a Russian company, that complicates the procedure. But don’t worry, there are various methods to get this letter.

1. From your hotel in Russia: you can ask your hotel if they provide the invitation service. In this case, they will provide you with a telex number that you will show to the Consulate. Usually hotel ask for a sum of money for this service, that can be up to 60-70 euros. So ask your hotel and think if it is convenient before booking!
2. Many travel agencies that provide you with the invitation letter. The agency should be properly registered with the Ministry of Foreign Affairs and possessing a valid “tour reference” number. Make sure you are dealing with a reliable travel agency which can provide you with registration and support services when you arrive to Russia. Many agencies provide you directly with the visa, and in most cases, this is the most convenient option in terms of money and time-saving.

The registration in Russia

Once you are in Russia you have to be registered with the Federal Authorities within 7 days, otherwise you will have troubles when leaving the country – you may be fined as well as deported and denied from entering Russia again for 5 years. Officially, the registration should be done by the accommodating party, so make sure your hotel does it for you. Hotels generally ask for a small sum of money to register you, and they give you a confirmation of the registration request.

IMPORTANT: during your travel in Russia, always keep with you: