It’s midnight and we’re on board of our “Limousine” minivan, desert bound. 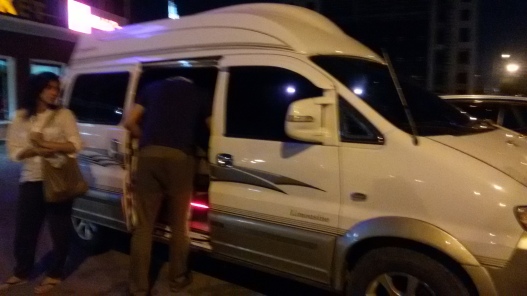 The road is pitch black and we can feel the vastness and emptiness around us, although we can see anything but darkness from our windows. Only a few sparkles twinkle in the distance. They’re probably fires in some ger camps.

We’re about two hours in and suddenly Ganbaatar calls: Look!

A bunch of baby deers is crossing the road in front of us. Wow. 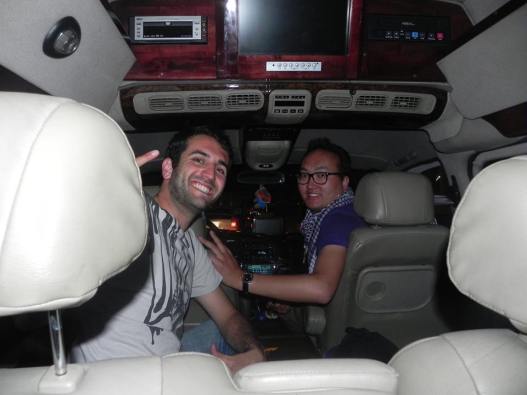 We try to get some sleep but the road is so bumpy there’s just no hope for it. At 5.30 AM or so we get to our destination.

The darkness is fading out and a pink line paints the horizon in the distance. We walk up to the Khamar monastery, a pilgrimage site for women, who we see walking around it and pouring cups of milk on it, while everyone else is waiting for the sun to rise.

I stand there, looking straight onto the horizon. The sky gets pinker and pinker, an orange halo indicates the spot where the sun will rise. All around us red dirt and rocks, interrupted here and there by bushes.

Then it begins: a flash of light and up up up. Each second the sun discloses itself a bit more, till it reaches its full shape and hangs there, a few inches over the skyline, while the Mongolians behind us start chanting with their arms wide open and their hands pointing to the sky. It’s breathtaking. 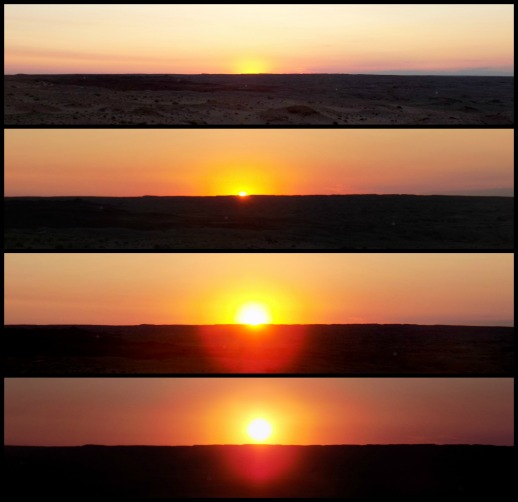 We walk up to the Northern Shamble Energy Center, its entrance is marked by a huge painting on a red wall, representing the Buddhist eye symbol. 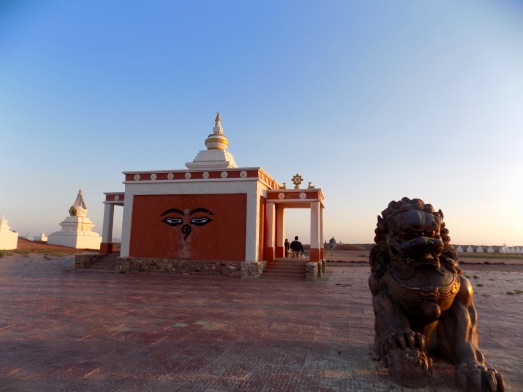 The ground is covered in bright red stones, the biggest ones concentrated in certain spots, as if brought together by some sort of hidden magnet. People lie on them with their limbs spread open as to capture such energy. 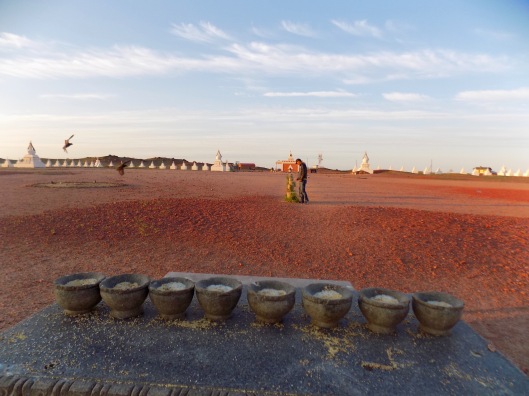 The sky is incredible. The now almost white sun floats on the pink and blue sky, hitting the red of the ground and the white walls of the monastery. 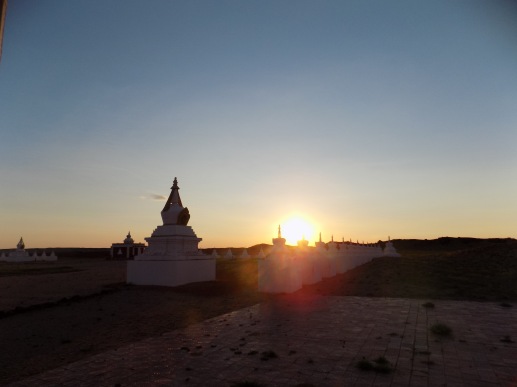 Blue Buddhist flags hang around a round stone on the edge of the walls. 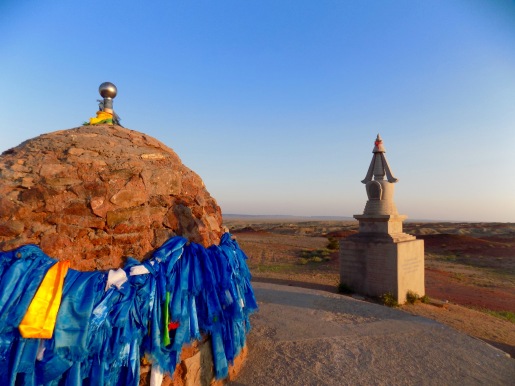 A golden sphere dominates its top part, to capture and multiply the energy.

I see your shining face, my dear

and truly you have captured

my entire mind and body.

you relieve the stress in my mind

your kind words are gentle, my dear

with such kindness you sit

born upon the breeze

is beyond words my dear

you more enter my thoughts

flowing from the heart of the lotus

joy in you, my dear

makes me even happier

Makes me even happier

in this human age

to do what you wish is to wish

for the things so heaven

afloat upon the ocean

let us be joyful together. 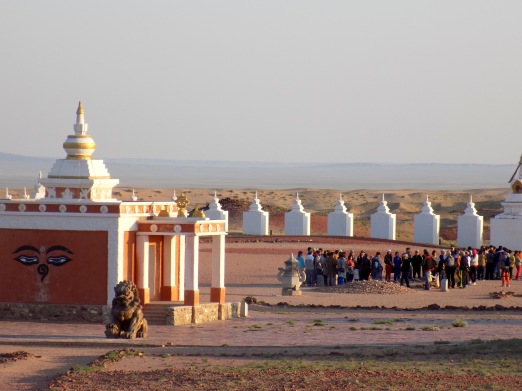 We spend the rest of the morning visiting local sites: the Ike Tenger Bell, the Uvgun Suvraga Temple Complex (still under construction) and the Meditation Caves of Noyon Khutugt.

Buddhist statues are hidden inside the caves, gifts and offers at their feet, Sakura bushes surprisingly growing in the gorges. There’s one particular cave that’s called the womb and has two round holes on each side: crawl in from one hole and crawl out from the other in order and you’ll be reborn. 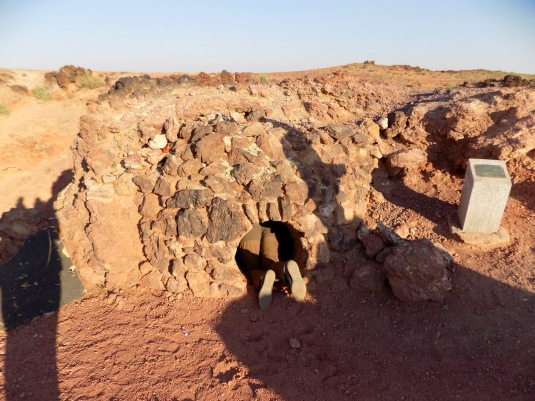 We drive on till we reach an area where different landscapes seem to weirdly coexist: the ground gets greener as the bushes become more frequent and close to each other, hiding the red dirt and then they suddenly stop, interrupted by sand dunes. Then, the ground goes back to its brownish color while blue hills appear in the distance. 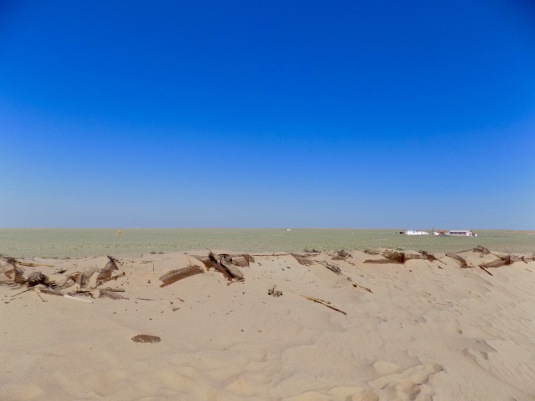 We walk on the dunes and the wind hits our faces, carrying waves of sand and blinding us. I take off my red bandana, tie it to a wooden stick and plant it on the ground. Then I write the initials of a dear friend who passed a couple years ago and who always talked about making it to Mongolia. I look at the red thing blowing in the wind and think of him for a second and I can see him, happy, with a smile on his face. It’s like he is here. And it’s hard to explain and maybe I’m just tripping, but while we were walking from the Energy Center to the Ike Tenger Bell, a dog kept following us, leading the way, stopping when we stopped. Then he came to me and leaned his head on my leg. And as I stroke him and he looked at me, it felt more like he was comforting me in some way. Saying “don’t worry, I’m still here. Everything’s okay”. And if souls do reincarnate, I could swear that it was him, in that dog, saying hi to me. 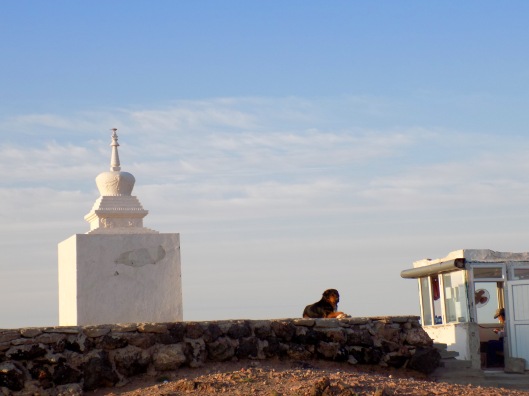 We drive to a Ger camp and order some buzy, while our driver rests for a while. Then, the others fall asleep and I decide to go for a walk. I climb the nearest hill to its top, curious to see what’s behind it, and there another hill appears on the horizon. I climb that one too and the game repeats itself. Over and over.

I sit down and look down at the ger camp. Everything is quiet. Time goes slower. The sun hits my face but it doesn’t bother me. I could stay here for hours, letting all this quiet take over me and speak to me. 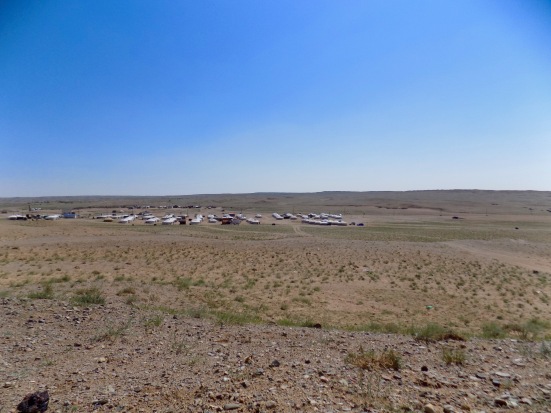 After a while, I reluctantly walk back to the camp, we pay for our food and go back to the car. Ganbaatar says it’s time to head back to UB, and well, we’d like to stay, maybe spend the night here, but apparently he’s in charge of everything and whatever he decides goes.

We pass through Shainshand, the one and only city in the area and as I look at the desolated streets I wonder how it would be to be born here, to grow up in such a place.

I fall asleep despite the heat and the terrible road conditions while looking out the window, the wide steppes repeating themselves over and over, acting like a lullaby.

We’re about 10 kilometres out of UB, when our car suddenly stops. I wake up and look at Marta next to me as she goes “What’s wrong now”. We look out the window and see one of the wheels lying on the ground. Wait, no, it can’t be. Not again! 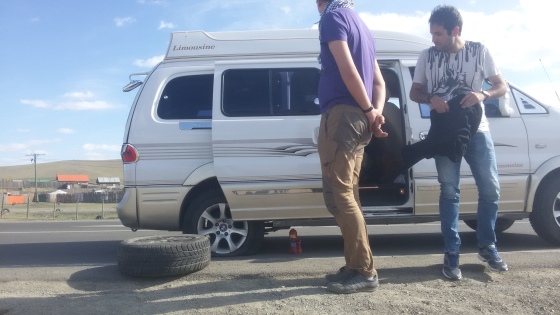 And well, yeah it did happen again, the car broke down (this is what the fifth time it’s happened since we left Moscow?). What is wrong with us? Gianmario blabbers something about his grandma and that we seriously need to Skype her so she can do an anti-malocchio or something. Yep!

Alright, we get off the van and walk to the river nearby, while the driver calls for some help and tries to figure out how to fix the problem. A bunch of horses is running in the field in front of us, lead by their khozyain. 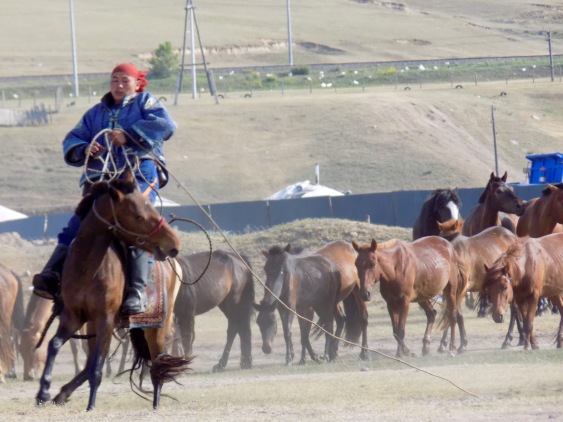 Half an hour later it becomes clear that the problem can’t be fixed within reasonable time, so another car comes and picks us up. There’s two drivers in it, for who knows what reason, so both the front seats are occupied. We squeeze in the back and hang in there till we finally get to Ulaanbaatar. Not comfortable, but well we made it back.