13 June. I wake up on the train, upper bed, again. It’s almost 8 AM, local time, and in less than a couple of hours we’ll arrive in Omsk.

I climb down my berth using my incredibly graceful and refined technique, and take my seat. The man in front of me is already up. He’s huge and I remember being sort of wary of him as I first saw him yesterday, as I thought to myself: oh man, why did I have to end up in front of this 40-year old fat Russian man?

Actually though, I had to change my mind about him, as he proved to be an genuinely nice and kind person. I remember asking him last night where he would stop, and after telling me he would also get down in Omsk, he opened up completely and started telling me about his life, his job, his wife, his view about Russia and his support for Putin. I remember him asking me: is President Putin feared abroad? I guess this would sound like a really weird question in any other country, but not in Russia. As I answered, well, yes, he said: Good. It’s good that he’s feared. I support him 100% in everything he does!

He also explained to me about the Russian land, how the landscape changes along with it, going east. He made me notice how the taiga would start around the Omsk area and warned me about insects, ticks especially, some of which can be quite dangerous as they bring entsefalit, so he recommended me not to walk in the grass in Omsk.

Then he asked me about myself and showed me how to move around and what to see in Omsk. He even gave me the number of a taxi driver and told me to just call him and say I wanted to go to Tarskie Vorota and that I could walk through the city and see everything I needed to see from there.

As we are having breakfast, as soon as he sees that Marta doesn’t have a seat to eat (her bed neighbor is still sleeping), he gets up and gives her his seat, like a true gentleman. As if that isn’t enough, he also gives us directions to reach our hostel, using a weird app on his phone to show us the way.

The more I spend time on this trip, the more the image of the rude and cold Russian gets disintegrated and substituted by that of genuinely interested and kind people, ready to listen to you as a foreigner and help you out and tell you about their great country and the love and attachment they have toward it.

Oh, and also, this guy had quite an interesting story. He was born in Donetsk, where he still has a brother, then grew up in Kazakhstan and moved to Russia to work for Gazprom. He told me how small the zarplaty are in Russia and Siberia especially, around 40,000 Rubles a months, less than 500 Euros, and finally, when I asked him what he thought about the situation in Donbass he went: А Donbass, eto – nash, da!

As we arrive to the station and start walking toward our hostel Dostoyevsky, again, we are kind of thrown off by the fact that the city, or at least this part of the city, really looks like a village rather than a city, made up by crumbling wooden houses with eternit roofs, scattered around two main streets crossing each other. Here and there kiosks of babushki selling pirozhki or flowers.

The more we move further along the Transsiberian, the more we have the impression that Russia really is a massive village in the end, surrounded by limitless forests and fields.

Anyways, it’s den’ Rossii today, the Day of Russia. Hurray. We take a bus toward Uspensky Sobor, from where we can see the “celebrations”. A crowd of soldiers all lined up is standing in the middle of the square, ready to start the parade. On a stage in the distance a bunch of generals and I’m guessing local government members are dispensing medals to lieutenants and other army members, thanking them for their service to Russia.

After watching the parade, we visit the church and start walking around the city. Call me crazy, but all in all, I can say I actually find it “prettier” than Yekaterinburg (Sorry, Catherine). I mean, it is definitely poorer, in worse conditions in terms of infrastructure, but at least it has its own vibe. There is some desolation in it that makes it charming. It’s like this city has its own identity. Yes, the identity of a godforsaken place in  the middle of nowhere, bended by the incredibly harsh weather and by its location, but an identity all the same.

As used as we are to Moscow’s urban jungle, what strikes me about it is the absence of tall buildings. Most buildings in Omsk have the height of those you would find in an Italian city, steep roofs alternating with flats of no more than 8 storeys. Yet this, coupled with the width of the roads and the space separating each building, gives the city a weird atmosphere, definitely uncommon to the eye of an Italian or even a European. It’s like it adds to the general desolation of the city and gives it breadth at the same time.

We walk along Tarskaya ulitsa, then down the river till we find a stolovaya where we have lunch for just 100 Rubles. The sun is shining and there’s about 25 degrees. Finally a warm city! We walk to Park Pobedy, find some benches and just lay there in the sun for an hour or so, the sound of the water running the square fountain in the background.

We then cross the bridge down on Lenin Avenue and reach the point where the Om and the Irtysh rivers fall into each other, then keep walking along the Irtysh and discover some sort of beach. People are laying in the sun, playing ball and bathing in the river. Music is playing and a group of youngsters is having some sort of push-up competition. It’s the saddest and coolest place in town somehow.

We ask for a lemonade at a kiosk by the beach and they give us a sparkling orange beverage served in unlabeled plastic bottles. Not what we were expecting. We decide to have a sip anyway and… don’t do that.

We finally hop on a marshutka from prospekt Karla Marksa and stop at a produtkty to buy some food for dinner. The situation gets a little out of hand an we walk out with an entire grilled chicken.

We spend the evening at the hostel, cooking our chicken, planning our moves in central Asia and playing UNO cards with the two administration girls who are just so lovely and friendly.

14 June. We get up around 11 AM, no pressure, have breakfast and head to the station to find a marshutka for Achairskii Monastyr. We drive for about an hour in the deep countryside, random women appearing out of nowhere and hooping on the marshutka.

We get off and walk across the entrance gate of the convent into a a huge park with a number of churches scattered here and there. At the other end of the main path, right in front of us, there a huge statue of a patriarch, standing in a mighty pose, his arms raised toward the sky. Creepy.

We visit the monastery and walk around, enjoying the fresh air and sound of the leaves blowing in the wind. Then we find the famous istochnik, a holy source of hot water with supposedly healing powers. A whole bunch of people are bathing in it, from children to old ladies. We are actually impressed at how warm the water is. I read it maintains its 36.5 degrees temperature even during the Siberian winter. 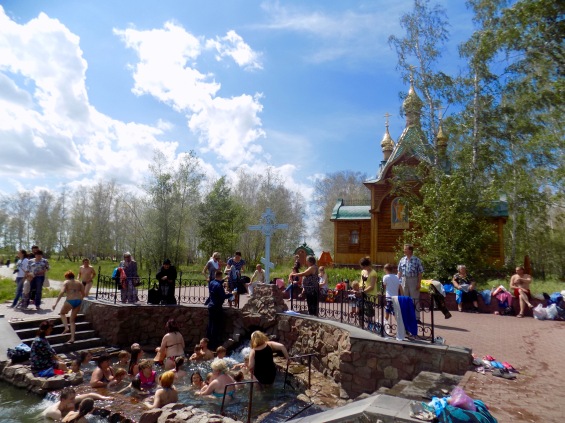 Not too far from it, there’s some kind of resting area with tables and benches and an old chubby nun serving chai and bulochki in exchange for a small donation. As soon as she realizes we are foreigners, she encourages us to take more.

At about 5 PM we figure it’s time to head back, so we exit the convent and cross the street. We see a bench with a bus sign next to it. That should be it. We sit down a look at the road. Nothing but us and the empty fields. Cars start passing us by and we have no idea how long we’ll have to wait till a bus shows up. Finally, we see a marshutka and hop on it.

Back at the hostel, we hear some loud Russian music coming through next door: it’s a wedding reception! We take a look from the open door: it looks like a wedding from the 80s, cheap oversized dresses and music you could only hear in a Russian club, or canteen, for some reason there’s no difference.

We climb upstairs and find Nastya and two other guys from the hostel watching Zoluchka on the projector. They ask us to join but the music from the wedding is so loud that we all quit it after 10 minutes and decide to start cooking pasta alla carbonara. When it’s ready we invite everyone in the hostel, who seem to love it.

After dinner we go down to catch some fresh air and there are now three people dressed in bees costumes in the hallway. Why? We don’t even wanna know.

It’s now time for goodbyes, as we’ll leave early tomorrow morning. We leave our signature on the Dostoyevsky wall, even try to draw a map of Italy and shamefully fail, but it’s the attempt that counts.

… and that’s pretty much it! And yeah, I’m glad we ended up at this hostel, Katya and Nastya were just so cheerful and it was just nice to know these two Siberian girls, born and bred in Omsk, somehow stuck there and eager to know about our country and our story. 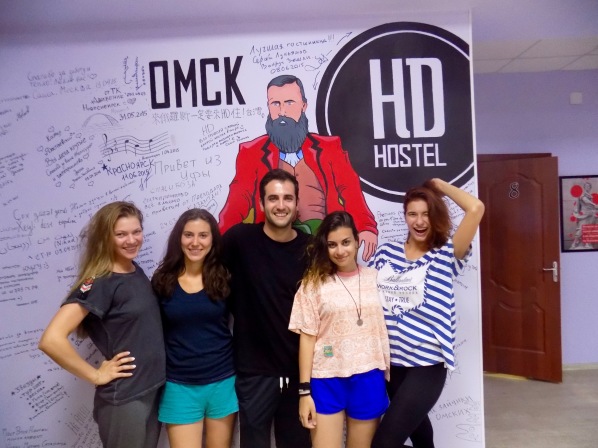